The VT132 faithfully implements almost all of the features of the original Digital Equipment Corporation (DEC) VT100, with the Advanced Video Option installed.

To this a range of enhancements have been added

A good reference for an owner of a VT100 (especially getting started with the Setup screens) is the original VT100 Users Guide over at VT100.net. Details of what the Advanced Video Option adds can be found here also.

The remainder of this section will largely focus on where the VT132 implementation of the VT100 differs to an original VT100.

The DEC VT100 keyboard differs from a modern PC (PS/2) keyboard in a numbers of ways. The following keyboard mappings are made for keys that were present on the VT100 but not available or not the same on a PC keyboard.

# Key and indicator mappings for the PC keyboard

The ONLINE and LOCAL indicators are not shown on a PC keyboard but the mode is shown in the SET-UP screens by a visual ONLINE/LOCAL indicator.

The KEYBOARD LOCKED indicator and the keyboard lock function are not implemented by the VT132.

The L1-L4 indicators are not implemented by the VT132.

The BREAK key function is not implemented by the VT132.

The LINEFEED key does not exist on a PC keyboard but is equivalent to pressing <Ctrl><J>.

The NO SCROLL key is mapped to the <Scroll Lock> key on a PC keyboard and is equivalent to pressing <Ctrl><S> and <Ctrl><Q> alternatively.

The original VT100 keyboard was essentially a US keyboard with a small concession to the UK in that the <Shift><3> combination could be configured to transmit a £ symbol instead of the usual #. This is also true of the VT132, see US/UK setting in SET-UP B.

In addition to the standard US PC keyboard layout, the VT132 also supports international keyboards for the UK, France, Germany, Italy and Sweden (with more to follow), see Keyboard in SET-UP D.

SET-UP A and SET-UP B screens are faithful to the original VT100 with the following exceptions:

All setup screens display either ONLINE or LOCAL at the right-hand-end of line 4 to compensate for the absence of indicator LEDs for this purpose on the PC keyboard.

All setup screen include integrated help that can be displayed by pressing function key F1 on each setup screen.

The SET-UP A and SET-UP B screens with integrated help are shown here: 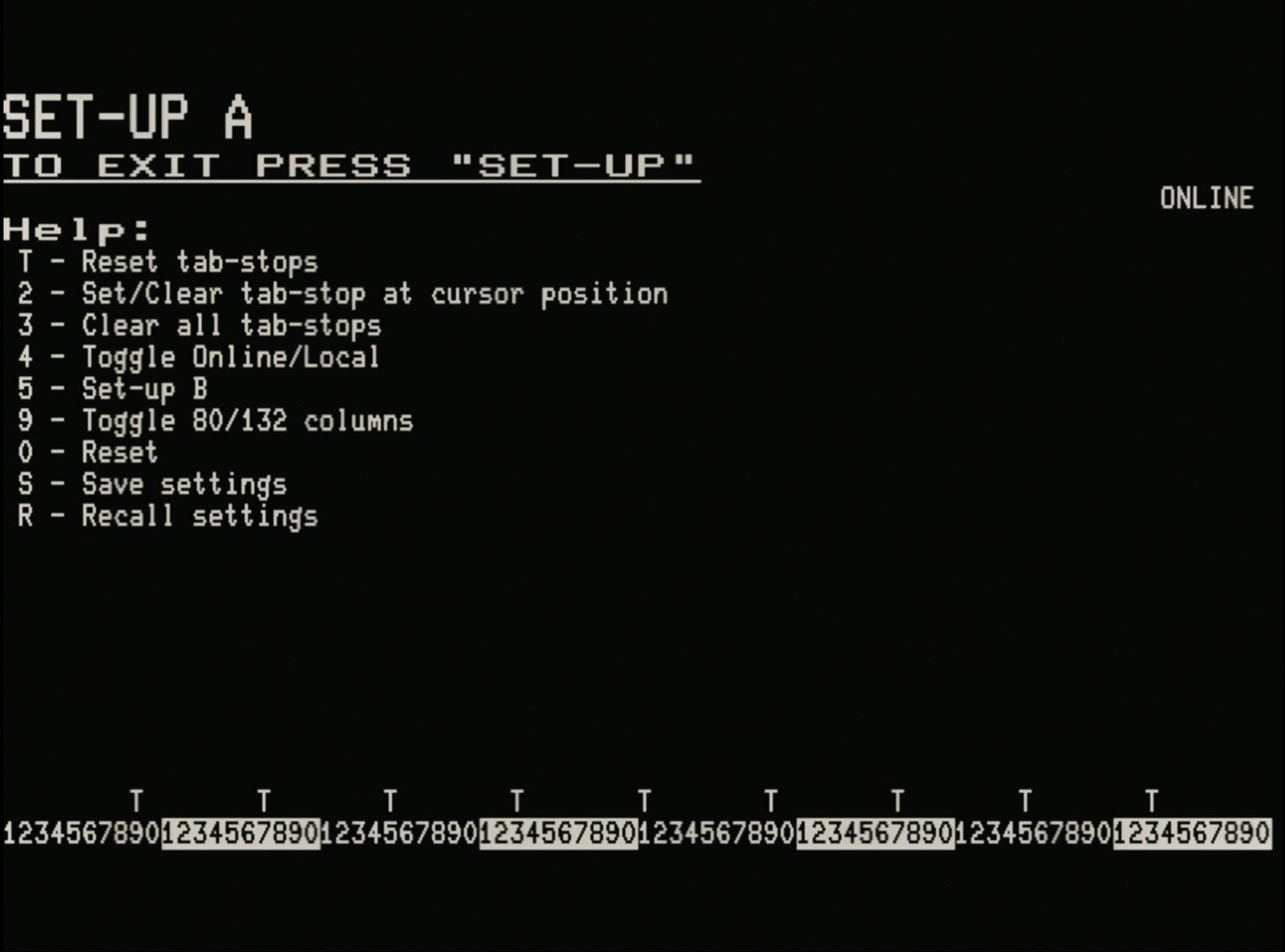 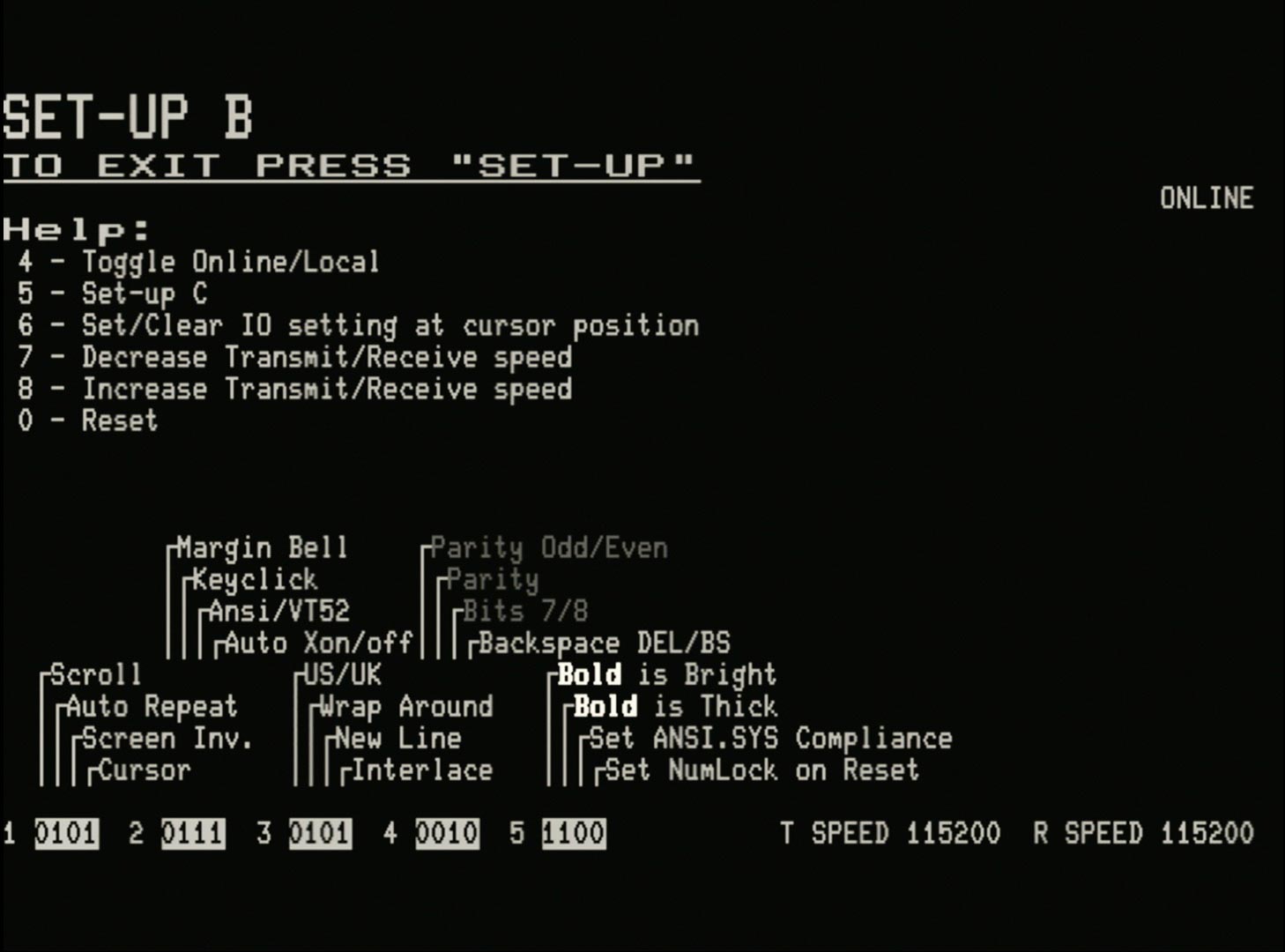 The VT132 implements the key combination <Shift><T> to reset tab-stops to the default 8 character spacing. This was a feature on the VT102.

Consequently in SET-UP B, both the 7 and the 8 key will cycle through the available baud rates changing both T SPEED and R SPEED simultaneously.

Only on the SET-UP B screen the key combination <Shift><C> will clear the NVR for the VT100. This will cause a return to factory defaults on the next power-up, hardware reset, soft reset 0 or recall <Shift><R>.

# SET-UP B - advance to next setup screen (enhancement)

See the separate sections on the features of the SET-UP C and SET-UP D screens.

# Part 3 – Definition of Each SET-UP Feature

The definition and function of each feature on the SET-UP A and SET-UP B screens is faithful to the original VT100, as described in the User Guide, with the following exceptions:

The bits per character for the VT132 is fixed at 8, enabling 8-bit extended ASCII modes of operation

The parity for the VT132 is fixed to None given that the bits per character is fixed at 8.

The parity sense for the VT132 is not relevant as the parity is fixed to None.

This 'soft switch' bit on the SET-UP B screen has been replaced with a bit that shows/sets the current DECBKM Backarrow Key Mode (enhancement).

Sets the SGR attribute Bold to be rendered bright

Sets the SGR attribute Bold to be rendered double thick

One or both of these attributes must be set, it is not possible to clear them both.

The default is that they are both set, making *bold both bright and thick In ANSI.SYS mode it is typical to set only bright. This is done automatically by the Ansi.sys macro in the Quick Menu (see: Ansi.sys emulation mode)

Sets the NUMLOCK key on whenever settings are restored from NVR.

The VT132 does not implement the screen brightness feature of the original VT100.

The self testing described in this section of the VT100 User Guide is not implemented by the VT132.

There are tests performed during power-up for the internal memory of the ESP32, keyboard and Nonvolatile Memory (NVR). But error codes resulting from these tests are not displayed on the VT100.

Find a mistake? Got a suggestion? Edit this page.